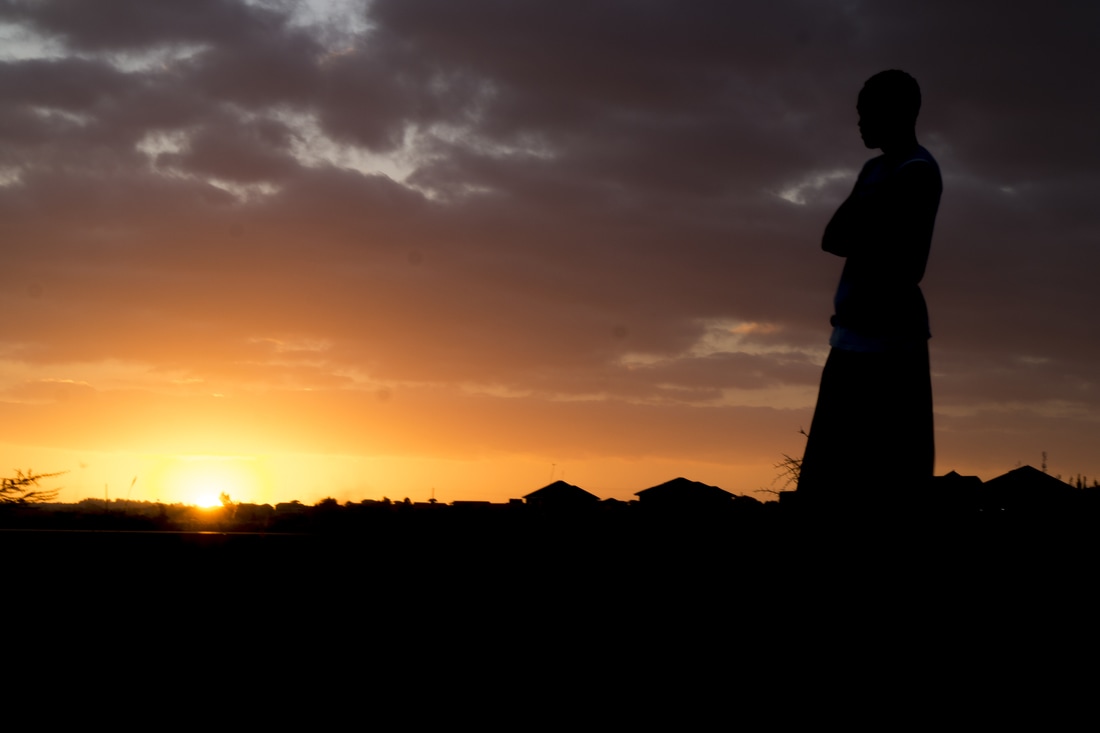 image: Mwakesi Mwakale
Robiko's Employment Agency
Doris Achenga Odit
Motionless and pensive, Misaki sat staring at the long lines that had gathered at the Kanti Consulting Group & Employment Bureau offices in Robiko—a city outlier area. With beads of sweat dripping down his dark forehead and moisture building up in his palms, he questioned the practicality of wearing his black suit and tightly knotted purple tie.

There were scores of people there. He dared not scan the crowd for fear he would meet a familiar face, like he had at all his interviews.

It was exciting at first, the whole charade of going for job interviews—an excitement that had largely been fueled by naïve optimism. He had often, in his many interviews, met young people like him, some of whom he was well acquainted with through the halls and lecture rooms of his former university, naïve and ready to change the world with their raw buoyancy. He had held on to his idealistic bubble of the perfect job, car, house, and maybe even one day, the perfect wife and family, for much longer than necessary.

But two agonizing years of unemployment have a way of transforming ingenuous buoyancy into realistic apprehension. And maybe, he thought, scores of his jobless acquaintances had also come to the same conclusion. He half smiled, knowingly. Of course they had. Shortly after they had just graduated, it used to be that when they met on the streets, there were long conversations: “How have you been?” “Where do you work now?” “Have you gotten a job yet?” And the usual answer: “Am chasing up a few opportunities here and there.” But when you have the same conversation for over two years, things begin to get awkward. Subconsciously, they had developed an unwritten ground rule that had worked well so far: if you meet me, greet me, and move on.

He looked up, startled by a raspy female voice. A bony wide-eyed, dark twenty-something-year-old girl stood there looking at him with large almond eyes, her brows drawn together as though expecting some kind of action on his part.

“Huh? Sorry?” He answered. She pointed over to the empty space on the bench next to him.

Nodding, he quickly moved over on the long wooden bench. She sat.

Curious and keenly aware of her presence, he studied the girl through the corner of his eye as she shifted on the bench fumbling with her new envelope, and adjusting her knee length grey dress. She had that look, he thought, that fresh out of college optimism that was so palpable one could smell it. The new brown envelope spoke volumes. Unlike his, hers lacked the blemishes of tough days. The light brownish tan from overexposure to the scorching sun, the tattered edges from endless crowded commutes and the fibrous exterior from overuse. He almost envied her unsullied job-hunting experience. In a way it was refreshing—a reflection of who he was two years ago.

“When do you think they’ll start interviewing?” he asked, looking to converse with the girl. Looking at him startled, she shrugged without so much as a mumble before reaching out for her phone and busily scrolling.

With no sign of an ensuing conversation, he looked around the agency premises, absorbing his surroundings. It was just 6:45 am. There were a handful of people trickling in through the Mabati iron sheet gate. The compound itself was a tiny enclosure surrounded by rusty mabati fencing. It was a house, not an office, perhaps a remnant of old colonial houses. Light blue lead paint peeled off the walls and there was a protruding chimney pipe and asbestos roofing. It was misplaced, a lonely and old but grand house amidst a sea of one room homogenous Muzigo houses. From the valley one couldn’t tell, given the vantage point, but from the lush green hills of Kololo, Robiko looked artistic, its rusty metallic iron sheet roofs arranged in no particular manner.

He looked down at his shoes, noticing the unraveling of the cobbler’s most recent stitches. He then studied his documents, his “accomplishments.” Glowing they were, he thought. One by one, he filtered the foundations of his dreams, including his straight-A performance, before realizing one of his documents was missing. In a frantic daze, he began flipping through the papers, looking for the missing certificate.

“Is everything alright?” The girl next to him asked, noticing his restlessness.

Surprised by her concern, he replied, “I seem to have forgotten one of my certificates at home. I probably should go pick it up. Will you hold my spot?”

“Yes,” she nodded, half smiling, “Go!” she reassured him, as he bolted from his seat and rushed off.

His home was just a kilometer away. He’d take the shortcut, he thought, as he diverted off into an alley that ran between the agency’s mabati fence and a number of houses. He passed a couple of half-naked kids pooping out in the open and jumping over several puddles and mini streams of open sewers. He crisscrossed through scores of identical one room houses arranged in lines, as he gave the occasional respectful greeting to the housewives preparing breakfast off their charcoal stoves on their verandahs.

In three minutes, he was home—a ten square meter room with a wooden door and one window. A room he had shared with his law school friend, Rwabogo, since their university days. The compound had nineteen other similar rooms, all sharing a quadrangle and a single bathroom. He quickly unlocked the padlock. His room’s contents were basic—a shared bunk bed, an old coffee table, two small wooden benches and a TV. He walked to the lower bunk bed and lifted his mattress, rummaging through the various documents until he finally spotted his degree certificate. Placing it in his tattered envelope, he rushed out deciding to use the main road instead of the shortcut.

Misaki felt small beads of sweat dripping from his forehead, down his chin, and onto his navy blue pressed shirt as he rushed through the dusty pavement against the tide of human traffic. Like millions of ants converging from a tiny anthill, there were scores of people in the morning rush hour—honking boda-boda motorbikes ferrying residents, roadside chapati and mandazi snack sellers, and hundreds of pedestrians.

Rushing through the crowds, he got back to the agency breathless and panting. The compound, now loud with banter was at capacity. He worked his way through the crowd, his eyes darting left and right to find the girl that had offered to hold his spot in the queue. He finally spotted her close to the reception and started to make his way over before he was stopped in his tracks by a gregarious familiar voice.

“Banange! Is it you neighbor?” Turning around, his eyes widened. It was, as he suspected, his neighbor, Katende. Smiling sheepishly, he mumbled an inaudible response in effort to discourage further conversation. Katende had four kids and a wife with whom he shared his one room house in Misaki’s quadrangle Muzigo.  “Eh, banange, lawyer, I didn’t realize that learned friends look for jobs in places like this brother! Shouldn’t you be lining up at some fancy law firm in the Kololo hills?” he teased, laughing loudly.

“Well, a man has to feed himself when the hills don’t deliver.”

He responded by smiling in a good-natured way then politely excusing himself and rushing to the top of the queue.

“Thanks,” he said to the girl, taking his place.  She half smiled and nodded.

“Next! Please!” a loud voice emanating from a humongous woman standing on the elevated veranda with a clipboard over her chest, called out. He walked up the steps to meet the woman with a blonde mane of dreadlocks. “Name please?” she asked without any eye contact, holding out her pen.

“Misaki Kwejuna ma’am,” he replied, towering over her five-foot frame.

“Am not your mother, ssebo, don’t be calling me ma’am,” she retorted, frantically scribbling his name then glaring at him through the thick rim of her glasses.

Pointing at him with her pen, she asked, “Misaki? Rwabogo’s friend?”

“Yes. Yes! I know.” Rwabogo worked as a barman at a small city nightclub and served the dreadlocked buxom woman cocktails every Friday night. She’d often told him about her agency and had said she’d be willing to meet Misaki as a favor.

Motioning him with her pen to enter the offices, she added, “Talk to that man over there then come to my office for a chat.” She disappeared through the hallway.

Misaki took small deliberate steps to the single desk occupied by a beady-eyed man in the otherwise empty room. Uninvited, he took a seat, waiting for the man to finish scribbling something on a rough piece of paper. Looking up without a word, the man offered him the piece of paper, pointed to the hallway and said, “First door down.”

Taking the note, he made his way to the door, finding the dreadlocked woman seated behind a shiny Macintosh laptop. She looked up and motioned him to enter and sit. Scanning the contents of the room he noticed several stacks of passports on her desk, tied together with rubber bands.

“I assume you brought the necessary?” she asked matter-of-factly. He quickly handed her the brown envelope. Without reaching for it, she asked sternly, “Did you bring the money?”

His face contorted, he reached for the stack of cash in his jacket’s breast pocket and handed it over to her. He watched as she expertly counted the money, her chubby hand donning a perfect manicure and Rolex watch. As he watched her count, he thought of his father, who had loaned him the money. A rancher, who had once boasted many a herd, but one by one, he had sold his cows off to pay for his children’s education. Several years and cows later, he still hadn’t reaped dividends.

“Four million it is!” she said, placing the stack of money in one of her drawers under lock and key.

Looking up at him and flashing a crooked smile, she handed him a handwritten memo containing dates and details.

“If all goes well, my friend, you’ll be earning big bucks as a security guard in the Emirates in the not so far future,” she said. “We’ll process everything for you. Please make sure you are ready to fly by the twenty-eighth.” Standing up, she stretched out her chubby hand for a handshake, which he reluctantly took. “And tell Rwabogo to prepare a nice free cocktail for me on Friday.”

As he walked past the front room, he noticed the girl he had met earlier and wondered what fate awaited her in a foreign country, and what menial task she would be assigned to. Then he determinedly walked out the door and through the crowded compound, as he toyed with the idea of leaving Robiko. A watchman with a law degree he would be. Yes, but at least a Robiko dweller with a law degree he would cease to be!

Doris Achenga Odit is a freelance writer who dabbles in poetry, fiction and nonfiction, as well as current events writing through the occasional Op-ed column in any one of the local newspapers in Uganda and East Africa more broadly. Being a Ugandan, a lot of her fictional writing is a reflection of her observations and experiences as well as tales of the Ugandan people. In her opinion, a writer is only as good as their roots and their ability to absorb the cultures and societies that have influenced their lives.
The views expressed here are those of the authors and do not necessarily reflect the views or opinions of the editors.
© 2015-2022 Kikwetu