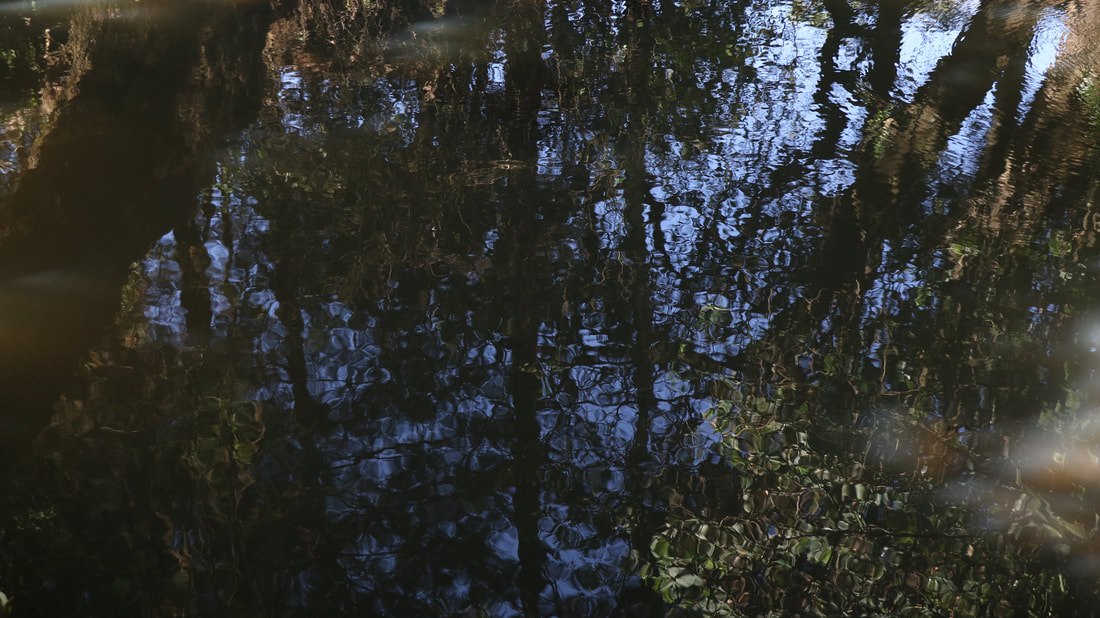 image: John Ndavula
My Late Grandfather
Kasimma
A piercing scream woke us all up! It was dark inside and outside. I grabbed my flashlight, turned it on, and looked at the wall clock: 6:40 a.m. I heard loud stamping of feet as if people were running. My sister and I wore our jackets and rushed outside with the rest of the family into the wheezing sound and slapping cold of the harmattan. Everyone gathered outside, just in front of the house as if forming a barrier against the intruder. My sister and I tried to get past them to see clearly, but a strong hand held our ears and dragged us back.

“Get inside!” our mother commanded.

We retreated, but we knew, even she knew, that we would not go inside.

I had no idea who made that sound. There were about fifty of us living in that massive compound. My late grandfather had six sons and three daughters, thirty-five grandchildren, one brother—that we knew of—, five nephews, two nieces, thirty grandnephews and nieces. That is more than fifty, right?

“Ezenwaka is coming,” another replied.

I did not understand what was happening. Don’t look at who? Why were they all raising their heads cunningly to peek at the figure?

“What is going on?” I whispered to myself.

“Someone is sitting on Grandpa’s grave,” my cousin Cheta replied.

“Yes,” he whispered back as he picked his nose. I no longer doubted he was the one as he was always digging his nose. Sometimes I prayed to God to help him find the gold he sought in that nose so that he could leave that nose alone.
I could not contain my curiosity. “Did you say somebody is sitting on grandfather’s grave?”

“Who is the person?” I asked Cheta, avoiding the argument.

“Grandpa himself,” he responded, boldly, implying that he knew exactly what he was saying.

“You mean Grandpa’s ghost is on his grave? How did it come out of the grave?” I asked, fearfully.

Cheta sighed and shook his head.

Ifeoma’s sweaty, shaky, goose-pimpled body touched me, “Ije, please come with me. I want to ease myself.”

“I cannot go anywhere oh, didn’t you hear of the ghost? Urinate here, abeg. nobody will beat you.”

That was when I heard the husky voice of my octogenarian granduncle singing incantations. He spoke Igbo, I am sure, but it sounded like Swahili, I guess. He was tying only a lappa on his waist. His fleshy torso, hands, face, and feet were decorated with nzu, the local white chalk used in purifying oneself before approaching the gods and slung on his right shoulder was a slim goat-skin bag.

“But Grandpa was buried six months ago,” I insisted.

“A branch of a palm tree was buried in his stead,” Cheta answered matter-of-factly.

​“One more word from any of you and I will send you to your room,” my mother said between clenched teeth.

I promised myself not to utter another word. I did not want to be caught by Grandpa’s ghost on the way to my room and zapped away to the land of the dead. What did he even come back to do? I wondered as I recalled how Grandpa died. They said he got drowned in Agwa river where he had gone to wash his bicycle, but nobody had seen him drown and there had been no corpse. The only thing they had brought back was the bicycle, his shirt, and the bathroom slippers that he had worn out that day, which had been found by the riverbank. Some even said he had committed suicide and, as was the custom, he should not have been buried. For lack of proof of suicide, Grandpa had been given an expensive befitting burial. And now, after all the money spent and “compulsory cows” slaughtered to secure his soul a smooth passage to the land of the ancestors, he had resurfaced. What if he had not drowned? What if…

Ezenwaka’s voice distracted me. I heard other loud voices and stamping of feet coming from the direction of the gate. I just could not miss this history. I lay on the sand and peeped between everyone’s legs. I saw Ezenwaka pick up a handful of sand and pour it on my grandfather’s chest. Grandpa did not move, his gaze fixed on Ezenwaka. Ezenwaka did that three times before he brought out a kola nut from his bag, chewed it and spat the contents on Grandpa. He drank from his green bottle of aromatic schnapps and spat some of the contents again on Grandpa. Grandpa stayed still. I began to wonder if Grandpa was even alive. Ezenwaka began another round of incantations.

Still singing, Ezenwaka slowly danced to the kitchen compound and came back carrying Grandma’s biggest white chicken. Singing, Ezenwka held the struggling cackling chicken by its legs and used its body to hit Grandpa several times. Ezenwaka hit Grandpa’s back, front, rubbed the chicken on Grandpa’s hands and legs, and hovered it thrice around Grandpa’s head in an anticlockwise direction. Still holding the struggling chicken on Grandpa’s head, Ezenwaka dug his left hand in his bag and produced some kola nuts. He threw the kola nuts on the ground, removed the chicken from Grandpa’s head, raised it, and said in Igbo:

“Ala, the goddess of fertility and the very earth, please accept these kola nuts we bring to you. God of our ancestors —” he reached into his bag again and produced some alligator pepper — “take this pepper to make the kola nuts tastier.” He scattered the pepper on the ground, brought out some more and threw it at Grandpa. “We ask you, Ala, the kind, to please release from your sacred womb the spirit of our brother, Ike, and take this chicken in his place, for we buried him in error.”

He sang some more incantations, dancing around the grave. He roared to no one in particular, “Quickly! Come and dig a fresh grave.”

The young men scurried away, giving me more space and I jumped up and filled one of the created spaces. My twelve-year-old body was slim enough to slide to the front and short enough to be hidden from the view of my mother.

I watched Ezenwaka sing and dance gracefully as he rained praises on the god of the land, Ala, all the while, the men dug frantically. While some dug up the grave behind Grandpa, others dug a new grave beside the old one. When they finished, some of them rushed off to fetch a branch of a palm tree.

“Ala, the kind, please accept the blood of this chicken,” Ezenwaka squeezed the neck of the chicken until it detached from its body as he held on tighter to its dying body. He poured some of the blood dripping from the neck of the beheaded chicken onto the ground where the kola nut lay and some on Grandpa’s head. “Let it cleanse Ike from the filth of the grave and also open the gate to the land of the living for him.”

Finally, Ezenwaka threw the body of the chicken in the new grave.

“For what you have eaten, Ala, the kind, you cannot vomit. Therefore, take this log in replacement of the one we buried in place of Ike’s body. Ala, the kind, please accept these and release Ike’s spirit back to us.”

He instructed the men standing by the graves to exhume the old log from the old grave and throw the new log into the new grave where the chicken laid. When they were done, he asked them to toss the old log away and cover both graves.

We all watched in silence as the men worked. As soon as they finished, Ezenwaka smiled at Grandpa as if he was seeing him for the first time, helped him up, and embraced him lovingly. Everyone rushed forward to embrace Grandpa as I stood there wondering why they ran away from him the first time and why it took all that show for them to embrace him.

I knew we were in for a long story of where Grandpa had been for close to nine months, so I grabbed Ifeoma’s hand, and we rushed to the bathroom to ease ourselves before coming back to settle down with the others to listen to Grandpa’s story. While we left, I avoided looking at Grandpa’s burial poster on the wall dated 20th June, 2018.
​
Kasimma is an alumna of Chimamanda Adichie's Creative Writing Workshop, IWP workshop, and SSDA Flow workshop. She's been a writer-in-residence in artists' residencies across Africa, Asia, and Europe. Her works have appeared or are forthcoming in The Puritan, Kweli Journal, The Book Smuggler’s Den, Jellyfish Review, Afreecan Read, and Orbis Journal.
The views expressed here are those of the authors and do not necessarily reflect the views or opinions of the editors.
© 2015-2022 Kikwetu