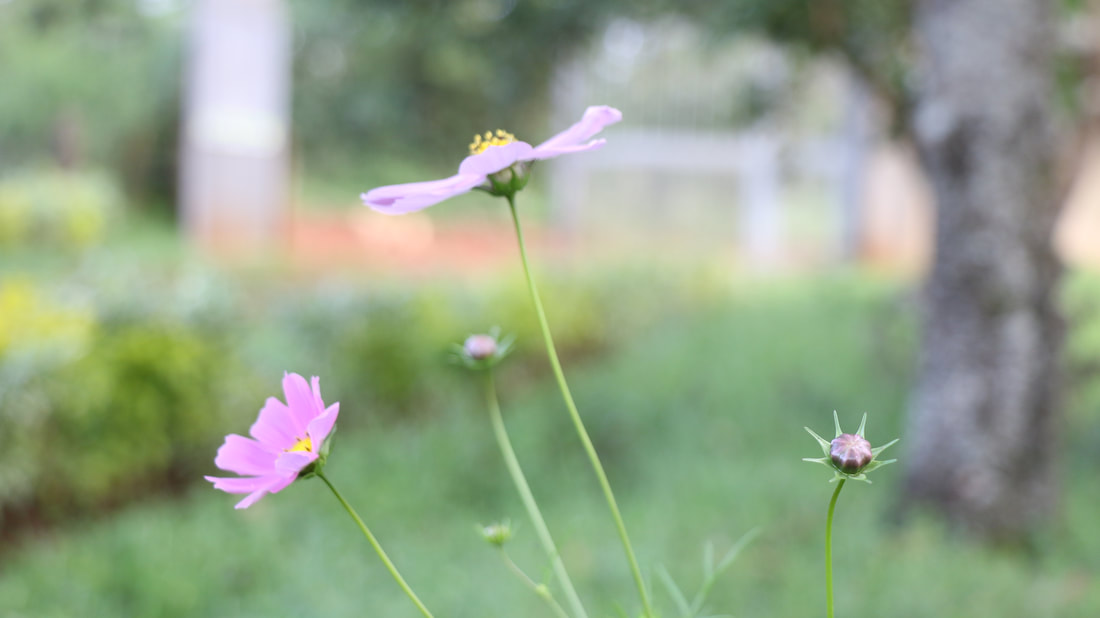 image: John Ndavula
Month 2
Ebele Mogo
Nkolika would have entertained the idea of closing her eyes and stealing a few more minutes of sleep, maybe even hours. Afterall, she had nowhere to go, except she could feel something wet and warm percolating in her crotch. She stood up and made for the bathroom and as she did, she felt it run down her legs and leave a trail across the hardwood floors.

Eyes barely open, she lifted the lid of the toilet and sat, ejecting the clingy toilet paper into the bowl with a plop! Everything was a blur without her glasses, but she could still see the red dot on the floor and the trail down the insides of her thighs and all the way to her lower legs. She felt some of the smeared stickiness between her butt and the toilet seat.

She took off her underwear, pulled the shower curtain aside and tossed it into the bathtub. Finally feeling her consciousness settling in, she stayed for a moment just looking at the mess. She had never been this soaked – there’d been a stain here, a blotch here, but this was different. It occurred to her for the first time, that she was a bleeding animal. She felt uncontained and yet comfortable.

She reminded herself that there really was no need to give in to that reflex to clean up immediately. It was lockdown and she had nowhere to go. She also did not live with anyone, so she looked at her red entrails once more and thought of the body that did this work every month—preparing so thoroughly, then sloughing off and starting over.

This was the second time she’d bled since lockdown and every time the blood came, she greeted it like a loved one. She’d grown fond of the little remaining certainty it offered her: two periods meant two months. And even if she was on an island with no clock, her blood would help her know how long it had been. Bleeding gave her a reason to feel less sad about crying herself to sleep the previous night. Maybe it was hormones after all, she thought, and that brought some hope that she would eventually feel better.

Before flushing, she stared at the soggy tissue in the bowl, the blood spots on the floor and the smear on the toilet. She took a towel, ran it under the hot water tap and began wiping herself. There was still more blood to collect from between her legs; clumps of the sloughing off too.

She wiped gently, like she felt a bleeding animal deserved to be wiped. She rinsed under the sink, over and over until she got most of the blood. Then she wiped under her feet where some of the blood was still hiding, the seat of the toilet and then the floor. At that point she put on new underwear and tissue paper and followed her entrails into the room to wipe them down. One spot had started to dry and as she wiped it harder the smell of iron hit her nose.

She rinsed the towel she had used and left it in the sink, then went back to the room, hoping to hit the snooze a little more. But first she flipped the duvet to search its white insides for a sign to pull it all out and throw in the washing machine. To her luck and surprise there had not been even one red patch. She lay down, relieved.

She remembered just a few months ago, how her bleeding had been so subconscious—a tampon replacement in the lady’s bathroom here, a pain reliever pill gulped down there, a red stain here, fading red going down the shower drain there. How contained it had been. How private, invisible—the thankless work that allowed the seven billion lives on the planet come to be. Certainly, if it had been a man bleeding, or even any other part of her body, it would be nursed and tended to. Why had this blood not received any of that love?

Instead the virtue was in making it discreet. She remembered when she had just hit puberty—all the women who had taught her that a period was not illness and that there was no need to act incapacitated by it. She remembered when one lady had told her friend that she had disgraced women for leaving her used pad in the toilet and having the boys see it. She remembered the women that had told her that if anyone saw your menstrual blood you would not be able to conceive. She did not believe the myth, but she did feel this need to diligently wrap her sanitary pads in many layers and hide them at the bottom of the bin. It felt like her privacy—her own blood. She remembered she and her friends taking turns to check one another for stains in ways the boys would not notice.

She liked how tampons did not make a mess down there and how they let her wear whatever she wanted. She thought she had ordered a box of them, but when she checked the storage for them all she found were boxes of baby wipes which she now had no use for since she rarely made up, and toilet paper. Everything took weeks to ship, and she did not want to go out just for tampons. That is how she ended up using tissue paper instead. Besides, she had nowhere to go, hence no need to fear leakage and stains and all that. The tissue paper was plush, so it really was not bad. She had gotten a whole case of them from her Amazon before the pandemic. The bulk order now felt prescient.

She stared at her tummy and decided to hold it with tenderness. It was bleeding after all. She decided to stay in bed a little longer. She was bleeding after all and besides, she had nowhere to go.
​
Ebele Mọgọ is a story teller, scientist, and innovator. Her writing has been published in the following places: Newfound, Third Point Press, Munyori Literary Magazine, Stockholm Review of Literature, Susan the Journal, The Offing, Saraba magazine, Tap Lit, Narrative Northeast, Brittle Paper, the Rising Phoenix, Interartive, among other places. She is on Twitter as @ebyral
The views expressed here are those of the authors and do not necessarily reflect the views or opinions of the editors.
© 2015-2022 Kikwetu