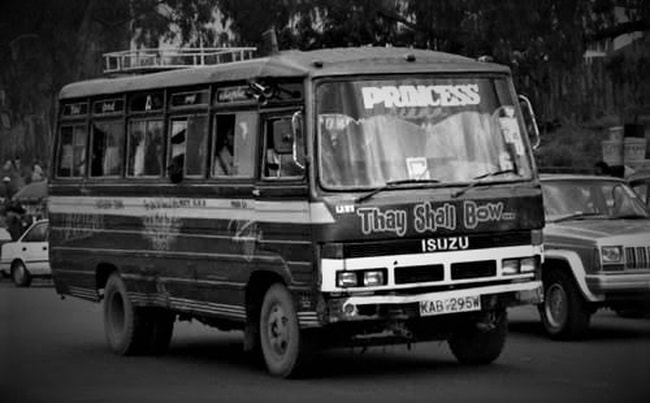 Kenyan Matatu Ride
Kariuki wa Nyamu
​A mother of five at matatu door
hands me her youngest baby
piles a smelly sack on my lap
with something hot inside,
and on boarding
she squeezes four other soiled kids
between my fiancé’s legs
and stares at her
breathing heavily to her side
Ugh! This must be a runaway wife!

Men!
In a Kenyan matatu
everyone is a conductor
you pull and push doors,
collect fare from guys behind
glued to their smart phones from China
typing, smiling,
head phones planted in their ears,
listening to music, I suppose,
then, out of the blue
a middle-aged woman confesses
how she left her husband
after a fierce fight over …thus she denied him … yes, that one
so the bestial man tore her …
bruised her …
and left her nipple-less on one …
she then declared to never open her … to any …
I very much wonder
who asked her!

Oh my! She continues
“I just spared his …
dare he confront me again,
I’ll cut his …”
I look at her again
She stares at me and poses
“Kijana, are you married yet?”
{Silence} I turn to my phone.
Type… Typed… Typing…
Here she is, again
“Kijana, it is you I’m asking?”
As a mzee tells her
“Ssshhhhh! We’ve children here.
Watch your tongue!”

Well, that’s a Kenyan matatu for you
the vessel of free drama
the arena where
men talk dirty politics
others say how they detest
this and that ...
drunkards sing merry Christmas
in hot sunny September
insisting they’ve ever seen Youasa tobacco-smelling old granny
keeps eyes on road
asking
‘Where have we reached now?’
And oh my!
No one answers her!

Our people, don’t you think
that sometimes I talk too much?
And forget that I’m travelling?
Yes, I suppose you know I enjoy
Kenyan matatu ride…

But, where on earth have we reached now?
​
Kariuki wa Nyamu is a Kenyan poet whose work has appeared in anthologies such as A Thousand Voices Rising, Boda Boda Anthem and Other Poems, Best New African Poets Anthology (2015, 2016, 2017), among others. He won the Babishai Niwe 2017 Haiku Prize, the National Book Trust of Uganda (NABOTU) Literary Awards in 2007, and the Makerere University Creative Writing in the Contemporary World Competition in 2010. He is pursuing a master’s degree in literature at Kenyatta University, Kenya.
The views expressed here are those of the authors and do not necessarily reflect the views or opinions of the editors.
© 2015-2022 Kikwetu