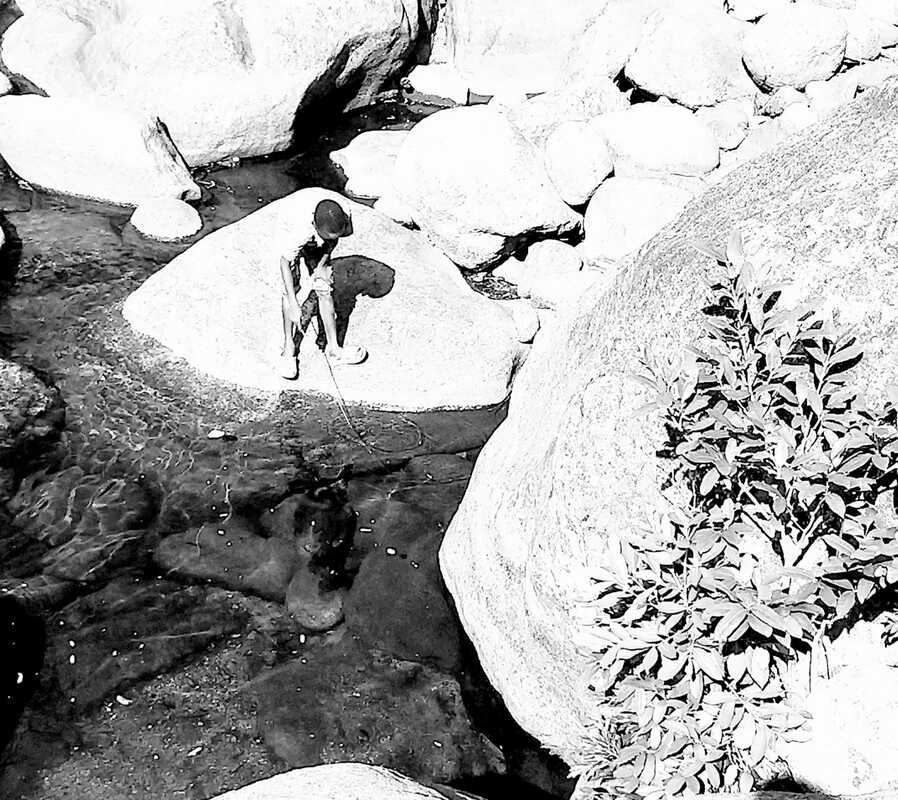 image: Ruth Kenyah
Mammy Water Boy
Martins Deep
All behind him now was the chant of singers, accompanied by drums and bamboo flutes. The earth was wet with sweat and drink offerings; the feet of dancers juicing every grain of sand for their scent. It was in celebration of his brother's marriage to a young widow. Obim walked; sullen face mirroring the restless sea, flotsam at his feet, washed of the screams that told from what household the owl would cry.

The soles of his feet savoured the wet sand as he tread slowly, following a trail of golden cowries over the boundary forbidden him to cross.

He finally stood. As still as a scarecrow when it pretends it is inanimate to avoid a farmer's worship. Here, he remembered the mermaids; their turquoise eyes, scarlet hair and slender fish tails swayed by the current. His music box was set amidst them on a pirate's skull. The gift, given by a European sailor, was the first exchange he made for singing clams to shore and carrying granules of gold from the seabed in his leaking pockets.

Memories of the coral reef filled his mind. They poured in. Wealthier waves bring something other than flotsam and news of a shipwreck. To the shores of his mind, each detail motioned like pixels forming a picture. One could watch them fit into the scene that was the haunting sight of waking up to see his father's tears and a man he mistook for ironwood wailing over his body.

"My son, my son!" he chanted, like a spell that failed to bring him back to life.
One Sunday morning at the beach, whilst the Aladuras prayed, Obim’s father had walked up to him, wool in hand.

"What do I need these for?" Obim had asked, eyes quickly lowered from his father, as if the longer he held his gaze, the more he would perceive the smell of his burnt eyebrows.

"For your ears whenever those voices start calling your name to the sea," his father had answered, his back turned to him.

"What voices, papa?" Obim had asked.

It was a dream. Relieved, Obim had cleared his eyes, lifted his pillow and found there, two pieces of wool the size of pebbles. Outside, he walked into the news of his father's passing. "He died peacefully in his sleep," a kinsman said. "Your father was a good man."

After his father's burial, Obim's oars were lassoed with the silken thread of a whisper. He had gone over the long line his father drew with a harpoon. It was a mermaid. She asked him to alight from his canoe, her mouth echoing a familiar song.

He let the weight of his heavy heart sink him like a millstone tied to a balloon. On he sank into the void, lighted by the brightness of the wonder that called him, and in his sight, a heap of keepsakes: necklaces, bracelets, and chaplets. There was a maiden swallowing a charm amulet cut off the wrist of a fisherman brought in the mouth of a shark. Little mermaids swam towards her breasts to suck the tears of the casualty's widow, their scales giving off the glow of a yellow, dying sun.
​
Obim returned, a boy walking in a seascape, feet not printed on the sand. They said he exchanged his footprints for seance with his mother's wraith, humming cradle songs by his brother's early grave.
​
Martins Deep (he/him) is a 27-year-old poet, photographer/artist, & currently a student of Ahmadu Bello University, Zaria. His most recent work has appeared, or is forthcoming, in Lolwe, FIYAH, The Roadrunner Review, Barren Magazine, The Sandy River Review, Eunoia Review, Agbowó Magazine, Rogue Agent, Twyckenham Notes, Cream City Review, Covert Literary Magazine, Kalahari Review, & elsewhere. He tweets @martinsdeep1
The views expressed here are those of the authors and do not necessarily reflect the views or opinions of the editors.
© 2015-2022 Kikwetu