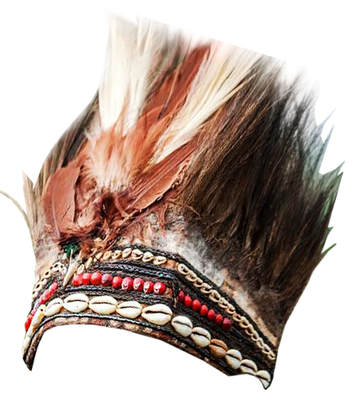 We had only ever heard of the great wonders and might of this sorcerer, but to see him in the flesh here in our village was the most exciting thing to happen in a long time; far more exciting than the fact that Ma Oketch had murdered her husband, my husband, Ba Oketch.

I should probably mention that no one had seen her do it, but it was obvious to everyone that she did. She had pronounced the unthinkable, dreaded kir, the wife’s curse, on Ba Oketch during the last sand harvest, ending all her duties and obligations as a wife and mother and revoking the dowry that had been paid for her. A woman had to really abhor her husband to pronounce the kir on him, for it was said to be more powerful than the curse of death. All this was brought on when Ba Oketch forbade her to worship at the new Etude shrine whose priest was Suleimani, his lifelong enemy. And when she became defiant and still went there, our husband locked the granary, refused to give her the daily share of food and marched her unceremoniously every evening to the bao tree in the middle of the village where the young men would bind her with sisal, strip her, pour salty water on her, then give her twenty lashes on her bare back. She would then be frog matched to the river and ordered to bathe. This went on until that fateful evening when she pronounced the kir.

Ba Oketch was advised to send her away. The elders hinted at banishment, but he opted for reconciliation. Ma Oketch’s people had come the next day, and under the byeyo tree, together with the elders, they had reached an agreement. Ma Oketch revoked the curse after that, but everyone knew that if a woman hated her husband enough to pronounce Kir, she was most certain to kill him. It had happened just as they predicted. Even the madman Kowari, when he heard death wails from our homestead and the three drum beats to signify the death of the patriarch, had immediately shouted with joy amidst great fits of laughter. “Osenege, she has finally killed him!” He had moved from home to home bearing the news with great dancing and merriment until his people had come for him.

I was the first to arrive at Ba Oketch’s hut when I heard my co-wife wail. Rousing from sleep, I heard the most horrible bone-chilling shriek. Other villagers quickly filled the hut where they stood huddled besides the bed sniffling silently for it was taboo to cry until the senior wife finished the first round of wailing.

I pried Ma Oketch gently from the dead body and the thronged hut and led her outside. She stopped crying for a minute, giving us the go ahead. Together with the women who had turned up, we scooped dust from the ground, showered it over our heads and wailed—me out of duty rather than grief, for I had only been married to Ba Oketch for two seasons.

Later, the village elders had come with the soothsayer and after sending the people away and conducting investigative rituals, they came to the conclusion that it was the hand of a man that caused the demise of Ba Oketch.

Because of the lack of evidence—as Ma Oketch had insisted amidst loud sniffles and hiccups that she woke beside our husband to find him lifeless—they sent the warriors to summon the great sorcerer for judgment and justice. Death, accidental or intentional, had to be avenged. Hand for hand, tooth for tooth and blood for blood. That was the law of the land. The village was abuzz. We all expected another death.

One could feel and smell the excitement in the morning air when he arrived. It was as if the sorcerer had brought his own radiance to the village. Even the wild Nyabende bushes whose leaves were always dull green had turned a shiny shade that morning. The birds were also louder than usual; it seemed they too wanted to impress the great magician. The village, having been swept clean the previous evening by all children under twelve at the command of the elders, sparkled. New structures were hastily put up at the chief’s baraza shed. The women, who had painted their huts with ochre and chalk the previous evening, were now beautifully adorned in brightly colored head wraps and their best armlets and wrist bands. Nature and man were all in competition for the sorcerer’s attention. Only our homestead remained untouched, so much so that even the rooster didn’t bother to crow that morning. It probably knew of the sufferings that were coming in the day.

Ba Oketch’s body still lay on the bed, preserved by herbal portions. The funeral dance could not be performed until after noon, until kwor, vengeance had been paid or else the ghost of Ba Oketch would trouble the villagers. For two days, Ma Oketch and I had taken to sitting with the body in turns because it was rude to leave the body of our husband alone. Our mother in law brought us food, sniffling horribly every time she saw Ba Oketch’s body. I pitied her. She never said a word to us the entire time, and Ma Oketch only spoke once to me, asking if the sorcerer had arrived. I didn’t answer her, I couldn’t. My mind was a river of thoughts and speaking would have prompted an unwanted leak.

At noon, the village arrived at our doorstep, led by the sorcerer in all of his glory. He came with two assistants and behind him our local soothsayer, then the priest, village elders and the villagers in tow. It was time to avenge Ba Oketch.

He ordered us to step out of the death hut and for the first time in a long time I felt the sun burn against my skin. It was hot, even scalding, fiery. I held my breath not wanting to inhale the moist suffocating air around me. Amidst this queasiness I felt my soul restored. Finally, I set my eyes on the man who held the fate of Ma Oketch in his hands.

He was a small bent man with a massive deeply marked face. His bowed shoulders gave an appearance of fatigue and yet his limbs showed he possessed unusual body strength. His eyes were sharp darting from one place to another, taking in everything. He was dressed in animal skins with striking colorful head gear made from hornbill feathers. On his neck were large cowry shells, bones and claws of birds. In his hands he held a small bundle, wrapped with banana leaves and from the bundle came chick like sounds. My eyes shifted to his two assistants, tall thin men who were dressed in a similar manner, but without the headgear.

A circle was drawn with white chalk next to the granary. Our mother-in-law and the young Oketch were already standing inside of it with their arms up in the air. The assistants pushed us in violently. Although the villagers knew Ma Oketch to be the guilty one, the sorcerer considered us all suspects.

“Four people are in the presence of the spirits,” shouted the sorcerer. At this the crowd fell silent. Our trial had started. “One is guilty and responsible for murder and before I finish my ceremony, three souls will remain alive and standing and one will fall down dead,” he finished with a loud stretching cough.

There were jeers and cheers. The wild crowd hurled insults towards Ma Oketch, Young Oketch was sobbing silently, and I rubbed on his shoulders gently. “It will soon be over,” I whispered to him.

Ma Oketch stared silently into the distance; she looked old, sad and tired. I wondered if she was thinking of her last ten years of marriage, or of the nights when Ba Oketch, after staggering back drunk, would beat us in turn until he tired. Those were the only nights when like sisters, we would tend to each other’s bruises, and then wake up the next morning like strangers again. I wondered if she thought of the days she had been frog matched, stripped naked and caned by the youths for defying her husband, or if she would be glad to die and be at peace.

The rituals started. The sorcerer removed his juok, which he had wrapped in a small bundle. We were all surprised when he uncovered a concoction in a small tin and set it on the ground, where it shook fiercely by itself until he ordered it to stop. Picking it up, he smeared the foul smelling mixture on us as his assistants rattled gourds while walking around the circle and chanting high pitched ululations. The three of them pranced and gesticulated wildly at us, dancing and screaming inharmonious chants. And then, just as suddenly, they stopped.

All was quiet after that. I looked to see if any of us had died, but our hands were all still raised in the air. With smeared confused faces we looked at each other.

“The juok I’ve applied on you is now working,” the great sorcerer said to us. “Right now it’s feeling the insides of you, the one who has committed the murder cannot escape.” All eyes were fixed on him and his eyes were fixed on us.

He went on, “If it finds no just cause in any of you,” he then turned to look at the village elders, “those who ordered its bringing will pay the price, for it has come, and now it must kill.” There was great fear and trembling amongst the elders. The people took a step backwards, afraid of standing too close to them just in case Ma Oketch was innocent. The great sorcerer looked at me. I breathed in short gasps. My bones were on fire; utterly crushed. My body swayed to and fro like a man overcome with brewed adila. At that moment my knees gave way and I fell to the ground. There was a collective gasp of surprise and shock all around me as I writhed in pain.

“A virgin orphan girl from a good family,” they said when I was presented as a peace offering to Ba Oketch by Ma Oketch’s people. “She will make a good second wife, just give us one goat for her.”

Other girls fetched six goats, three cows and sacks of maize. But Ba Oketch had insisted on having me for free and so no dowry was paid for me.

I looked at Ma Oketch’s face as I drew my last breaths. She looked exceedingly sorrowful and surprisingly, not as shocked as the rest.

My body convulsed; it came undone with anguished torture. I coughed, choking as the darkness welcomed me.

Edith Knight Magak is a Kenyan reader by day and short story writer by night. She chiefly writes historical fiction and historical fantasy. Some of her works have appeared in Writers Space Africa, Six Hens and Pure Slush. Besides writing, she also enjoys traveling, taking long walks and laughing.
The views expressed here are those of the authors and do not necessarily reflect the views or opinions of the editors.
© 2015-2022 Kikwetu