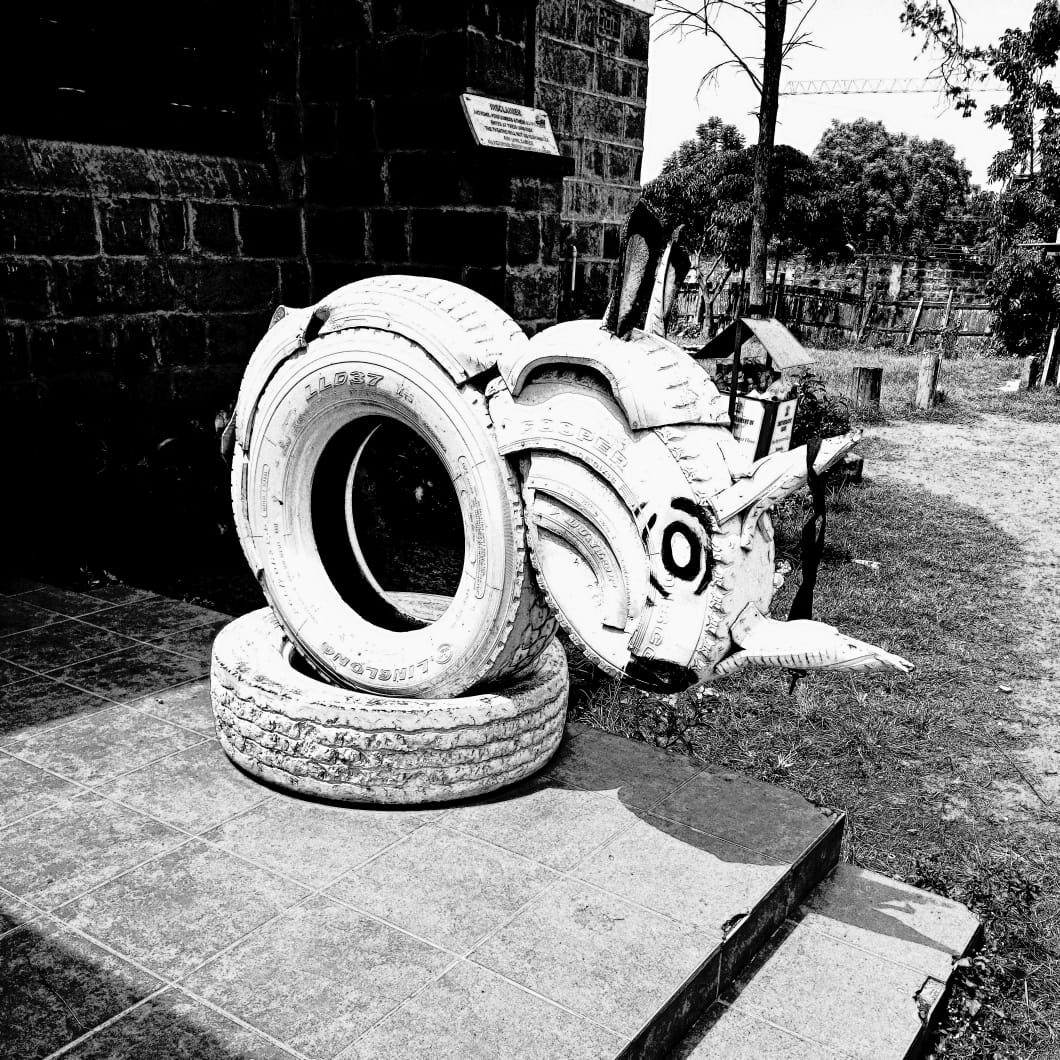 image: Ruth Kenyah
A Boy Called Daddy
P. Ochieng Ochieng
One Sunday evening in December an old girlfriend who had migrated to Sweden called me. Our conversation began with the guarded exchange of two people who had not seen each other in a while.

"Habari ya nyumbani?" she enquired about home.

"Baridi tele," she complained of the cold.

But it wasn’t long before our conversation thawed and we slipped into banter and laughter.

“Ulinitoroka,” I joked about her abandoning me.
​
“It’s you who chased me away,” she laughed.

On and on we went, until she finally revealed her real reason for calling. Her kid brother had been arrested and was being held at the Jogoo Road, police station. Could I be kind enough to nip over the following day, and see what I could do?
"No problem," I said. The young man had most probably gotten into a scrap, and would be charged with assault or some other petty offense, I thought. Until I got there the next morning to discover there had been guns involved and two boys had been killed during the incident. But that is running ahead of the story.

Monday morning, dapper in my only suit and a red tie, an empty file and diary pressed to my side, I squeezed into one of those Hamza-matatus. Loud reggae blasted overhead. Needless to say, by the time I disembarked outside Our Lady of Visitation church, my ears were ringing.

The brief walk to the nearby Jogoo Road police station where Daddy was being held—yes, the boy’s name was Daddy—afforded me time to organize my thoughts. Only recently sworn in as an advocate, I had little experience with such situations. I played out the conversation that might ensue, turning it over and over in my head. I would remind the police that they were dealing with a child in conflict with the law and not a criminal and that I would be willing to take him into my custody and produce him when they required him. And that locking him up would only expose him to hardcore criminals. I remained curious as to what charges the boy faced.

Save for a red-eyed police officer who stared at me from across the station report desk, the blue-walled room was empty. My loud announcement, that I was a lawyer, little impressed him. He continued flicking through a gigantic Occurrence-Book before informing me that Daddy was already at the Makadara Magistrates Courts, not too far from the police station. The boy was to be charged with Robbery with Violence.

The shock on my face made him smile. We both knew the offense carried a mandatory death sentence. Worse still, there was no provision for bail. This meant Daddy would be behind bars for the duration of his trial. It little mattered how bare the evidence was and whether the police were just being malicious.
“Wacha mahakama iamua,” the officer echoed the common police credo of let the courts decide, as he slapped the OB shut.

It was their modus operandi. Poorly investigated cases would be tossed onto the lap of a cynical judiciary. The police would then sit back as the accused languished in custody awaiting the determination of his case. It would take forever, with one adjournment after the other. Save for a miracle, Daddy would be in custody for at least three years as he awaited the conclusion of his case.

The holding cells of the Makadara Law Courts stank of urine. Daddy stared back at me from behind the cell’s metal bars. He seemed unperturbed by his predicament. Maybe he just didn’t comprehend the magnitude of the trouble he was in, I thought. But as our conversation drew on, I realized I was speaking to someone who knew the score. It was even possible he'd been down this road before.

“Tell me exactly how it happened?” I put on my no-nonsense-I-could-easily-smack-the-shit-out-of-your-teenaged-butt tone, as I interviewed him.

“Hebu nipe fegi kwanza,” the idiot ignored my question and demanded a smoke. His liquid-grey eyes were fixed on the packet of Embassy cigarettes in my shirt pocket.

Now wait a minute. Here I was, trying to save this cocky teenager from the hangman’s noose and instead of showing remorse he was asking for—no, he was demanding, a cigarette. Why should he even be smoking at his age?

Sensing my annoyance, Daddy let the cigarette issue ride and instead narrated his version of the events that had led to his arrest.

“Hiyo ilikuwa operation ya akina Karis, siyo yetu,” he protested that he had been arrested over a different gang’s operation and not theirs. His mistake had been to be in the vicinity when the cops raided his friend's house and shot two boys dead, recovering a Browning and Ceska. He reeled out the names of the guns like they were everyday toys. For him, there was nothing unusual about these deadly weapons being found in his friend’s room. It wasn’t until midday when he took his plea after which he was remanded into custody to await his trial.

***
Three years down the line, Daddy was acquitted. He had been arrested as a minor, but he was an adult at nineteen when he was finally acquitted. The prosecution had failed to call even a single witness.

His sister quickly arranged for him to join her in Sweden, but the damage had already been done. It mattered little whether it was nature or nurture that had played a bigger role in molding this angry, young man. Like a tree that was bent, Daddy was already set in his ways and could not be changed. Time would prove that, not even relocation to distant-Europe could make a difference.

A year after Daddy arrived in Europe, he was convicted of a drug related charge and did time in a liberal, Swedish penal facility. After serving his sentence he was promptly deported back to Kenya. A few months after his deportation, Daddy died in a hail of police bullets in one of the city slums that we euphemistically call informal settlements.

His sad course was run.

***
The story of Daddy reminds me of an old song by Mac Davis and made famous by Elvis, titled, “In The Ghetto.

On a cold and grey Chicago morning
A poor little baby child is born
In the ghetto...
People don’t you understand,
The child needs a helping hand
Or he’ll grow to be an angry young man someday
Take a look at you and me
Are we too blind to see
Do we simply turn our heads
And look the other way…

The lyrics end with the child growing up into an angry young man who buys a gun, steals a car, and tries to run but doesn’t get far. The young man dies.

The story of Daddy or Elvis’ angry child is not confined to the slums. Daddy lives in our midst. He lives in estates all across the country. Daddy is our neighbor’s child, our very own child. At times Daddy is even female. He begins with little transgressions like punching another boy in the face, busting his lip, and everyone says, “boys will be boys,” and he is just a kid going through adolescence.

But Daddy is always overdoing it. He beats up girls and boys younger than him. When he is accosted by someone his age, he pulls out a knife. By and by, he graduates to committing little felonies—if a felony can even be considered little. Still, we find excuses to explain his actions away.

Sneakers left to dry go missing, jackets on clothesline disappear, phones vanish. Though everyone knows Daddy is the culprit, no one dares call him out. His parents stand by him, insulate him from blame. Even when money disappears from the house, they blame anyone but Daddy. And all the while, he grows older, bolder and more vicious.

Incidents of burglary increase in the estate. A victim is slashed with a machete. Another is threatened with a firearm. A woman gets raped during one such robbery, and though she is shaken, she swears by the name of her dead mother that Daddy was among her assailants. So now the bad-boy has morphed into a violent criminal, ready to kill and maim. Now, save for his immediate family, who still believe he can be reformed, the consensus amongst all others is that Daddy has become a rabid dog that needs to be put down.

P Ochieng Ochieng is a writer and a lawyer. His work has been published in Munyori
Literary magazine, Kikwetu and Brittle Paper among others. He has been longlisted in
The Syncity NG Anniversary Anthology and The Short Story is Dead, Long Live the
Short Story! 2019. He has been shortlisted for the Golden Baobab writing prize 2010. He
is currently an author with Accord Literary. He has a forthcoming novel, August
2021 with Norton Young Readers/WW Norton Publishers. He lives in the lakeside city
of Kisumu with his lovely wife and two sons.
The views expressed here are those of the authors and do not necessarily reflect the views or opinions of the editors.
© 2015-2022 Kikwetu